Video about the project

The End of a Story


I have now finished Clara’s Story. It is running at 103,000 words.  All my novels seem to come out at that length these days – until the publisher’s editor’s had their say. I’ve edited it eighteen times, including giving it a final copy edit. I made myself concentrate on the words one sentence at a time and stopped myself worrying about anything else at this stage. I suddenly saw the text in a new light. Was this the way my readers were going to experience it?
Read more »
Posted by Gill James at 02:00 No comments:

Email ThisBlogThis!Share to TwitterShare to FacebookShare to Pinterest
Labels: fact and fiction in biography, glossary, history through fiction, proof-reading


Clara is certainly being wheeled out now. She also appears in The House on Schellberg Street and that is coming out on 11 April.
On 17 April, I’ll be reading from both The House on Schellberg Street and Clara’s Story, along with my two very good friends and talented writers, Sarah Dobbs and Debz-Hobbs-Wyatt, who will also read from their work, at the beautiful International Anthony Burgess Foundation in Manchester.
We’re holding an event called Women’s Writing. We’ll be talking a little about our writing and reading some excerpts. Then we’ll also read from a project we’re working on together. We’ll also discuss what writing within the framework of Higher Education is like, whether studying at university helped our journeys as writers and what our relationship to the academy is like now and whether that helps or hinders our writing process. And we’ll do a Q and A session.
Read more »
Posted by Gill James at 05:39 No comments:


Last Thursday I attended a special viewing of this exhibition at the John Rylands Library, Deansgate Manchester. I felt my work on Clara Lehrs is very connected with this because:
·         She experiences the Great War.
·         Letters are involved and letters are what inspired the whole Schellberg Cycle
·         Part of the exhibition is about a creative response to war, as is the Schellberg Cycle.
·         Here a voice is given to people who no longer have a voice and that is what my project does for Clara and several other people.
In addition I was particularly pleased to go along to this as Fine Art students from the University of Salford, where I also work, have been involved in the project.

Is she taking over?


I found myself the other day considering a situation at work and asking myself what Clara would do – and then decided to take that very same action.
Does this mean Clara and I are alike?
Or am I doing as all good writers advise and writing what I know?
Read more »
Posted by Gill James at 07:25 No comments:

Email ThisBlogThis!Share to TwitterShare to FacebookShare to Pinterest
Labels: creating characters, Rexingen, Stolperstein, The House on Schellberg Street, writing what we know

Getting it right for the readers


I’ve put the novel away for a short while. This has partly been enforced because I’ve had edits to do for The House on Schellberg Street and a heap of marking as part of the day job. Actually, though, this has been somewhat of an advantage. It’s given me some distance. Also, some of the issues that have cropped up there are also relevant here.

Who is the reader?

I’m concentrating now on getting this right for the specific readers. For this particular text the reader is quite difficult to define.
·         Is it someone who has read The House on Schellberg Street? Possibly, though that is a arguably a text for younger teen girls. Certainly, younger teens could read Clara’s Story if they’ve read The House on Schellberg Street.
·         Is it for a Transita reader? This is quite likely – except sadly, Transita no longer exists. This may be because middle aged women don’t like reading about middle-aged women. Possibly nobody does. Clara is right at the end of middle-age when her story really begins.
·         Is it for history-lovers? Or more precisely herstory-lovers? Almost certainly. It is after all, a biography, though written using fiction techniques. Her story has to be told, sad as it is, because she was such an extraordinary woman.
In the end, I guess, it’s just a matter of making it as engaging as I can. Thankfully, she is becoming more real. That has to be good.

Surviving in the camp


Clara did not spend long in Theriesenstadt. Just under a month in fact. But I’ve been very concerned about getting the detail about that stay right. We always assume it to have been a more benign place than many other camps and indeed at the time that Clara was there it was more of a transit camp than anything else though it also provided cheap labour for a country at war.
We have little idea of what it was actually like for her in the camp. And in my story-line I’ve included some fictitious characters – a pregnant mother who gives birth in the camp and her little daughter. I’ve borrowed a businessman who carried on running his business from within the camp. This man really existed and he was able to influence his captors. Here, I’ve used his influence to spare the lives of Clara’s friends and her two children.
But was Theriesenstadt all that benign actually? Probably not at the time that Clara was there. It wasn’t a death camp – a gas chamber was added much later. Neither was it the “holiday camp” fabricated for the Red Cross, nor were there yet football matches or an orchestra. Compared with Clara’s former upper middle class lift it would be pretty miserable there. Am I getting that across?
I’m currently reading Primo Levi’s If This is a Man /The Truce where we have a detailed picture of what Auschwitz was like towards the end of World War II. People had ways of surviving. Levi was enterprising and sold flints he “stole” from his work place and “sold” them for bread. Clara doesn’t survive but by being such a nice person sets everything up for her friends to survive. She is so good to everyone that she brings out the best in them.
Levi writes about Auschwitz, which we all believe to be possibly the worst of the death camps. I think I’ve made Theriesenstadt as gruesome. Clara’s family believed for years that she was transported to Auschwitz. We have recently found out, in fact, that it was Treblinka.
It’s likely that she and all the other old people in that transport would have been shot on arrival. They would probably not have known what was happening or not until the last moment. This was actually a quicker death than being gassed which at that time took on average twenty minutes. We don’t see that particular scene in my version of Clara’s story. In the epilogue the two children are now quite grown up and help with archiving of information about the Rexingen Jews. At that point they believe that she went to Auschwitz. Only in the notes at the end, and here, do I reveal that where she actually she went.

Email ThisBlogThis!Share to TwitterShare to FacebookShare to Pinterest
Labels: Auschwitz, Clara Lehrs, If This is a Man, Primo Levi, The Truce, Theriesenstadt, Treblinka


Looking better now
I’m thankful that what worried me when I read the text through the first time has largely been dealt with. It does seem convincing now and I believe the reader will develop an interest in and an empathy for main character Clara. The World War I scenes now work better though even in this second read through I’ve noticed some places that need developing a little more. 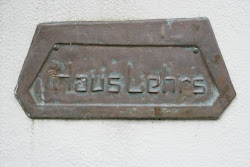